A conversation with Irene Solomon Arnold and Allan Hayton 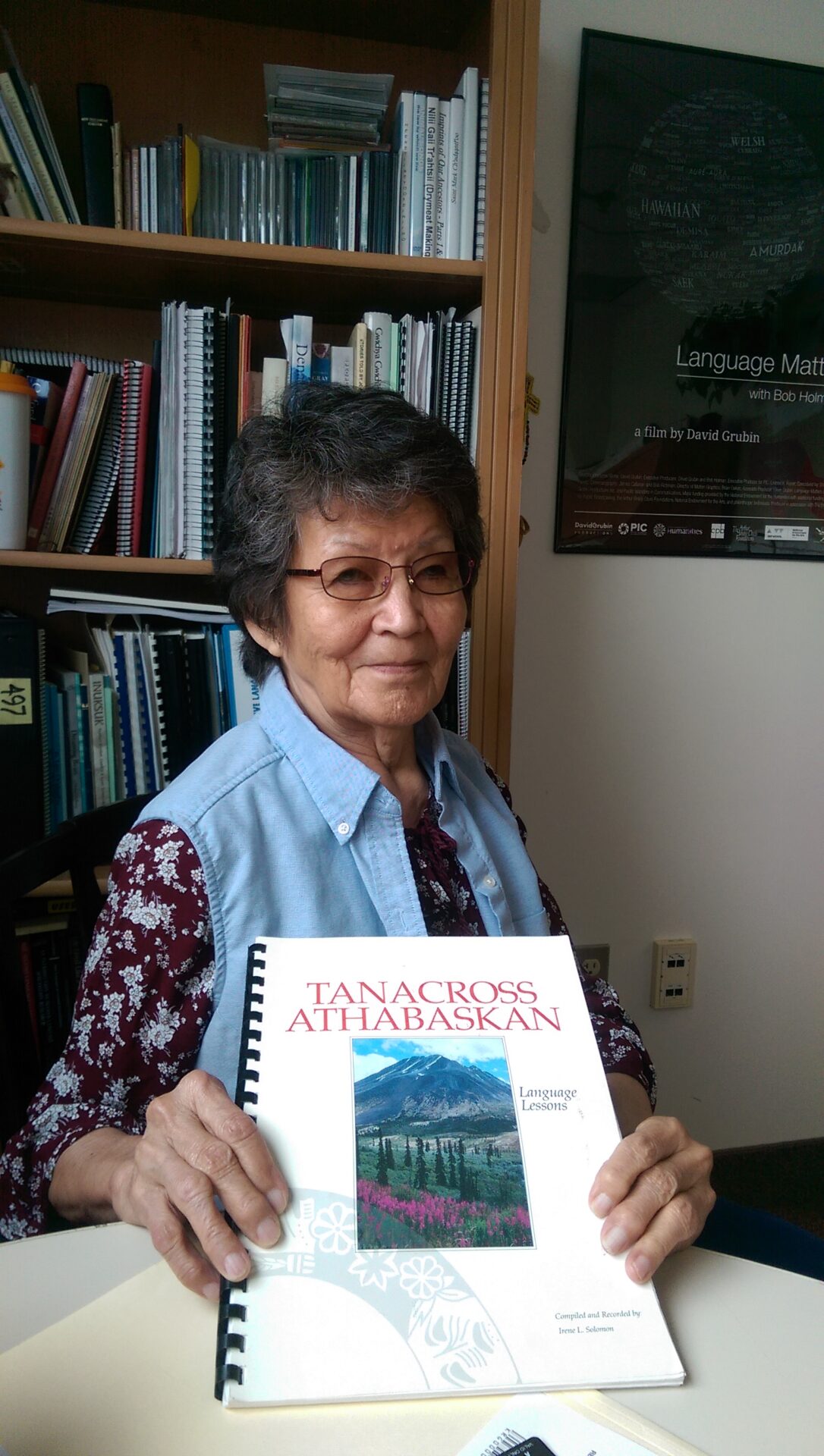 In 1992 Irene began teaching the Tanacross language in Tok, Alaska, for the Alaska Gateway School District. She completed an Associate of Applied Science in Native Language Education with the Yukon Native Language Centre at Yukon College in Whitehorse, in conjunction with the University of Alaska Fairbanks. She has been a lifelong advocate for language and cultural education for younger generations.

Tanacross is the ancestral language of the Mansfield-Ketchumstuk and Healy Lake-Joseph Village bands of Athabascan people, whose homelands extend from the Goodpaster River to the west, the Alaska Range to the south, the Fortymile and Tok Rivers to the east, and the Yukon Uplands to the north. The language is spoken in the villages of Tanacross, Dot Lake and Healy Lake and is one of nine endangered Athabascan Dene languages in the Doyon region. Efforts are underway to continue speaking, teaching and learning the language.

AH: Thank you for agreeing to be a part of Foundation’s Language Champion series. This series highlights people across Doyon region and their work in language revitalization. Doyon region has 10 languages. We are one of the only ANCSA corporations with this many languages, but I think it’s a blessing. Really, they are like riches right?

AH: Riches of the land, and of the people.

IA: And we are fortunate enough to have a fluent speaker or speakers in each of these languages. That is so good to see because when I got started in the 80s, we had no idea it was going to come to this.

AH: I feel the same. When I was growing up, I didn’t expect in my own lifetime that the Gwich’in language might not continue.

IA: When I began I didn’t think I was going into the language field. When the boarding schools made me quit speaking our language, I just eradicated it from my mind.

I came back in ’66, and I really began to take interest. I wanted to know what all the grandmas and grandpas were saying. My grandmother and all of them were speaking this rapid language. I would just be blown away. I realized they’re telling interesting stories. I didn’t expect to learn it. I just wanted to hear the stories.

So there began my teaching and I didn’t know it. Grandma would say words and she would look at me, and I know then I am supposed to repeat it. I had a southern accent, a really deep Georgia accent, so that’s what made them laugh more. Except for my dad and uncle Andrew Isaac, and grandma. They didn’t laugh. They probably did, but they wouldn’t let me see it.

In my mind I already knew how to say the words because subconsciously I was paying attention. When it was time for me to pronounce the words, it was already there. Then the more I worked at it, and listened to tapes from those old stories, and then languages and then the memory came back slowly, and the correct way to pronounce words, until finally I could sit and talk with grandma and them.

If I said something wrong, my grandma would repeat it. She wouldn’t say, “Not that way,” she would simply repeat it. Without prior instruction, she knew how to teach language.

AH: That’s good that you had a teacher like that.

IA: Yes, she had patience.

AH: What was that experience like when the language started coming back to you?

IA: It was like a dream. I would listen to tapes of the old folks talking, and memories would come back of where I was when I heard that story. I started comparing the different ways people spoke the language. My grandmother would tell me old words, and she made me aware that there are different dialects.

I got interested in the meaning of different words. When we were doing the Tanacross Learners’ Dictionary (Dihthaad Xt’een Aandeg’  The Mansfield People’s Language, which Irene authored with Gary Holton and Richard Thoman), I would take other dictionaries like Gwich’in and I’d find the word. I would compare them and come up with the correct word for our language.

When I started, I was working as a youth counselor, and they asked me if I would teach our language. I told them, “I don’t know how to teach.” They said, “Yes you do, you know how to counsel and do talking circle, do it that way.” And so that’s where it started, my language work.

I went to Tok UAF (University of Alaska Fairbanks) campus, and asked if there were any courses that would teach me how to be a language teacher. Because I knew there had to be something else. My students could not advance after a certain point. Eventually I found the Native language teaching at Yukon College. Avis Northway, too, she is the first recipient of the Native language certificate from Yukon College. I would use Avis a lot in my language class. And she became almost fluent in Tanacross language, and me in her language.

Together we learned you need to have one room where you dedicate it to your language class, because you put all this on your wall. All different pictures of different seasons. Just basic stuff, just put it up there, let them see it every day.

We realized children are more visual learners. We would take them outdoors, even when it’s cold, we’d take them outdoors and show them what we’re talking about. So I stayed with Tok School for three years but there was no support.

AH: When you came back in 1966 and began to hear the language again, re-familiarizing your tongue and beginning to speak, do you feel like you began to understand the way of life and belief more?

AH: There is research that shows children benefit from having their language in terms of their wellbeing, and health. It’s a support for all learning, to have that grounding in the language.

IA: Especially nowadays the things they are learning on TV has nothing to do with village life. And yet our young people are so involved with that television and the technological world now. It’s so different from our way of life. No wonder they’re searching, and they don’t even know they’re searching.

I think our language really needs to be in the school. At this point in time it should be well established in our school, and it’s not. I don’t know what it is, or why it’s not, because we have all the material.

So that’s my dream for our language is to get it in the school, established in the local school. And if it’s taught like that on a daily basis, it will be a big success in our schools.

AH: Do you have a chance in your daily life to talk in your language?

IA: No, Tanacross has, let’s see, they have, there’s Mildred, fluent speakers, Nellie Probert, Mildred Jonathan, probably Jerry Isaac, probably half dozen people who can speak fluently. But there’s others too who speak and understand but they’re not fluent.

AH: It’s that way for Gwich’in too. There are younger people that can understand it, but they respond in English.

IA: You have more speakers than any language, it seems like. Because everywhere you see, you meet a Gwich’in, they speak to each other in their language.

IA: My goodness, I knew you when you were just that tall, and your mom. She used to do so much with you guys, and took you to a lot of places.

AH: Yeah, I miss her all the time.

IA: She always spoke your language with you.

AH: When I was starting to teach at the university, I would call her and ask “Amaa, jii nats’a’ts’a’ deegwiheenjyaa?”, “How do we say this?” I think about our departed loved ones, now they’re gone but I think they’re somewhere sharing stories again and reunited.

IA: Sitting by a river somewhere.

For a complete audio or written transcript of this interview, please contact the Foundation at foundation@doyon.com or 907.459.2048.

As Doyon Foundation continues to grow our language revitalization efforts in the Doyon region, we are noticing a group of people who are committed and dedicating their own time to learning and perpetuating their ancestral language. We are pleased to share some of these “Language Champion” profiles with you. If you know a language champion, please nominate him or her by contacting our language program director at haytona@doyon.com. Language champions may also complete our profile questionnaire here. You may learn more about our language revitalization program on our website.