“When speaking, a part of our history comes back to life” 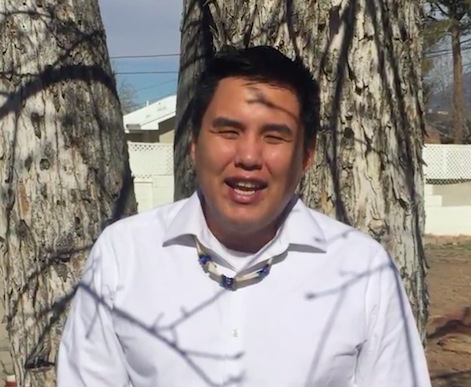 A committed language learner, speaker and student, David Engles is a content creator with Doyon Languages Online, a Doyon Foundation project that is creating online language-learning opportunities for nine of the 10 Alaska Native languages of the Doyon region.

David’s language is Benhti Kenaga’, a Doyon region language traditionally spoken in the vicinity of the Minto Flats and the Tanana Valley, including the region now occupied by the city of Fairbanks. It is one of 10 languages located in the Doyon region.

David’s parents are Celeste Engles and Glenn Alexander of Benhti. He wishes to recognize Betty Engles, Jim and Evelyn “Tudrock” Alexander, and Neal and Geraldine Charlie of Benhti.

David believes that upholding Benhti Kenaga’ as an established form of communication is a responsibility. “Our people created this language,” he says of Benhti Kenaga’. “Our language is a way of expressing ourselves with our unique worldview.”

David is in his junior year at the University of New Mexico in Albuquerque, New Mexico, and is pursuing a bachelor’s degree in linguistics.

Teachers who were instrumental as he learned Benhti Kenaga’ include Evelyn “Tudrock” Alexander, his paternal grandmother whom he calls Sitsu (“my grandmother”). David grew up around Sitsu and recalls that she always spoke to him in Benhti Kenaga’.

“She was so patient with me while teaching,” he says. “Every day we would engage in learning, from identifying animal parts to learning whom you give them to when feeding people.”

Acquiring vocabulary and mastering correct pronunciation in any language may be learned by rote memory; the strategy works, but it’s usually not fun. Tudrock’s method – incorporating lots of singing – made learning a joy.

“We even translated ‘Eight Days a Week’ by the Beatles into Benhti Kenaga’,” David says. And while they were singing, Tudrock was teaching the meaning of Benhti Kenaga’ words as well as how they’re ordered to express thought. Each lesson prepared him for the next. “We had fun,” he says.

As a content creator for Doyon Languages Online, David is part of a project with the goal to promote accurate use of language by teaching everyday terms. An example is learning to choose correct vocabulary for a given context – for instance, when to use “sitsu” (“my grandmother”) and “nitsu” (“your grandmother”).

Learning Benhti Kenaga’ is among David’s lifelong goals. His plans include producing short stories presented as children’s books and written in both Benhti Kenaga’ and English. The books are intended for anyone starting to learn Benhti Kenaga’.

“These stories can provide building blocks to a wider vocabulary,” he says. “Being able to express ourselves in our own language is a true reflection of who we are as people.”

As Doyon Foundation continues to grow our language revitalization efforts in the Doyon region, we would like to recognize people who are committed to learning and perpetuating their ancestral language. We are pleased to share some of these “Language Champion” profiles with you. If you know a language champion, please nominate him or her by contacting our language program director at haytona@doyon.com. Language champions may also complete our profile questionnaire here. You may learn more about our language revitalization program on our website.