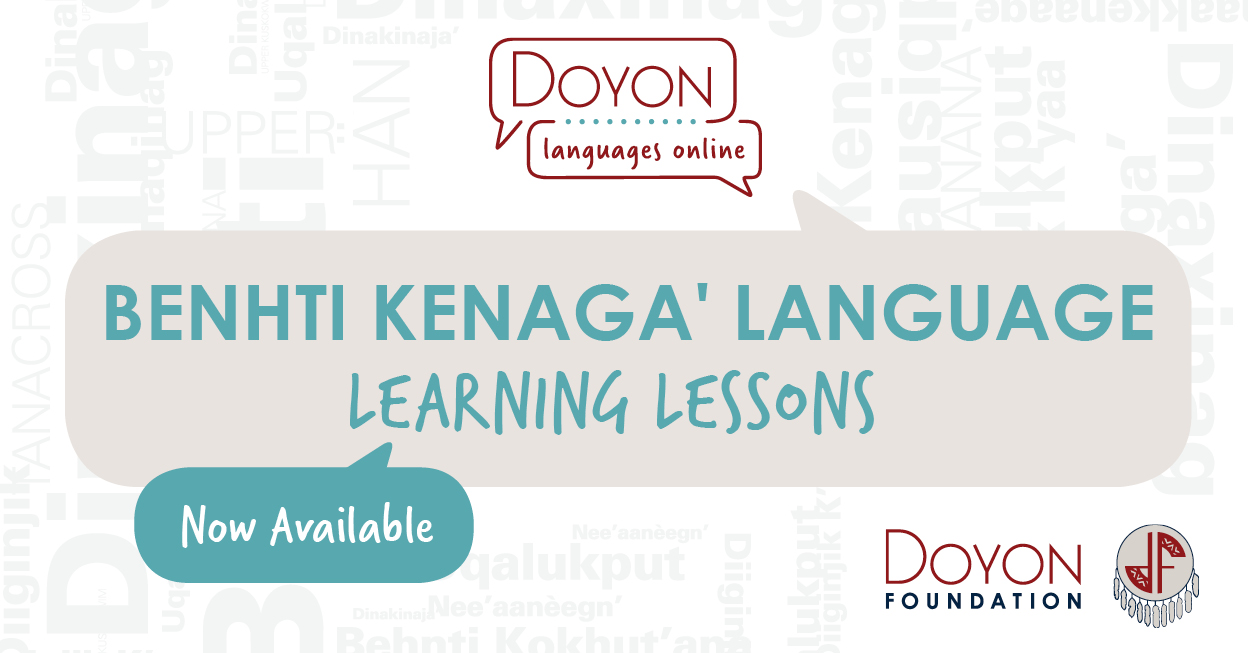 Course now available for free to all interested learners

Doyon Foundation officially launched its Doyon Languages Online project today with the release of a language-learning course for Benhti Kenaga’, one of the 10 endangered languages of the Doyon region. The online course is now available at no charge to all interested language learners through the Doyon Foundation website.

Benhti Kenaga’ is one of the string of Athabascan languages and dialects spoken on the Tanana River in Alaska. Benhti, Toghotili, Ch’eno’ and Salchaket are all members of this group, but only Benhti Kenaga’ is spoken now. Benhti means “Among the lakes” and Kenaga’ refers to “the language.”

“Today, language use is strongest within our songs, either alone or in a group. Singing gives us the ability to express a connection to the past. Growing up hearing Elders sing these songs of yesterday prepared us for today, and gives strength to move forward. This also is a part of who we are, something that makes us unique,” shared the Benhti Kenaga’ content creation team.

The course was developed by a team of content creators, Elders and a linguistics consultant, with the support of Foundation staff. The team drafted the initial course over a two-week time period last year. Over the past year, with linguistic consultation and coaching from speakers, the team finalized and recorded the course, and developed supporting content including videos, slides and interactives.

“The Benhti Kenaga’ content creation team is an inspiration,” said Doris Miller, Doyon Foundation’s executive director. “Witnessing them coming together to speak their language, share their stories and develop lessons that would allow them to pass their language on to future generations was an incredible experience. Doyon Foundation is so pleased to have played a role in facilitating this language revitalization.”

The finished course includes 10 units, each with five lessons of content, reviews and unit assessments, as well as 15 conversational videos with subtitles in English and Benhti Kenaga’, and 13 culture and grammar notes. The Benhti Kenaga’ Pocket Dictionary, published in 2009 and available through the Alaska Native Language Center, is a recommended supplemental resource for anyone taking the course.

The Foundation extends a special thank you to Elders Sarah Silas, Vernell Titus, Anna Frank and Andy Jimmie; the Benhti Kenaga’ content creators/contributors David Engles, Vera Weiser and Bertina Titus; linguistic consultant Siri Tuttle; the Village of Minto; the City of Nenana; Doyon, Limited; Doyon Facilities; Julian Thibedeau; and all of the authors and contributors who created materials for the Benhti Kenaga’ language from 1970 to today, making the creation of this course possible.

The Benhti Kenaga’ course is the first in a series of courses to be launched through the Doyon Languages Online project, which is creating introductory online lessons for nine of the 10 endangered Doyon region languages: Holikachuk, Denaakk’e (Koyukon), Benhti Kenaga’ (Lower Tanana), Hän, Dinjii Zhuh K’yaa (Gwich’in), Deg Xinag, Dinak’i (Upper Kuskokwim), Nee’anděg’ (Tanacross) and Née’aaneegn’ (Upper Tanana). The Foundation plans to release three additional courses over the next month.

Last month, Doyon Foundation gave a preview of Doyon Languages Online with the release of a special set of Hän language lessons based on the work of the late Isaac Juneby, an Alaska Native leader, respected Elder and language revitalization pioneer.

Doyon Languages Online is a partnership between Doyon Foundation and 7000 Languages, a nonprofit that supports endangered language learning through software donated by Transparent Language. It is funded by a three-year grant from the Administration for Native Americans (ANA), awarded in 2016, and an additional three-year grant from the Alaska Native Education Program (ANEP), awarded in 2017.

The Doyon Languages Online launch coincides with the International Year of Indigenous Languages, which Doyon Foundation is a partner organization of.  In 2016, the United Nations General Assembly adopted a resolution proclaiming 2019 as the International Year of Indigenous Languages. At the time, it was estimated that 40 percent of the 6,700 languages spoken around the world were in danger of disappearing.