Allan Hayton has been named director of Doyon Foundation’s language revitalization program. Hayton, who assumed the role in late May, will lead the program, which was established in 2012 to revitalize Interior Native languages and make language-learning opportunities available to all Doyon, Limited shareholders and other interested learners. 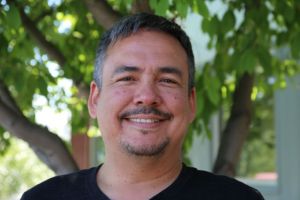 A Doyon Foundation alumnus, Hayton studied theatre and film at Haskell Indian Nations University and the University of Kansas, finishing his Bachelor of Arts degree in 1992. He continued at the University of Alaska Fairbanks, graduating spring 2013 with a Master of Arts in Applied Linguistics.

“It is essential that our ancestral languages not be forgotten. We are the ones who must pass these languages on to future generations,” he said.

“We are thrilled to add Allan to the team,” said Doris Miller, Foundation executive director. “With his education as a linguist and past experience in language revitalization, we are confident that he will be an asset to the Foundation. We are very happy to have him leading the effort.”

Hayton previously served on the Doyon Foundation board as vice president, and was chair of the language revitalization committee. He is also active at St. Matthew’s Church, where he serves on the Vestry, and can be heard singing Takudh hymns with the Gwich’in singers.