Allan Hayton, Doyon Foundation’s language revitalization program director, spoke recently at the invitation-only TEDxFairbanks 2016. The event, which was the first TEDx event to be held in Fairbanks, took place February 21 at the Morris Thompson Cultural and Visitors Center Theater, and was also web-streamed live around the world. View photos of the event. 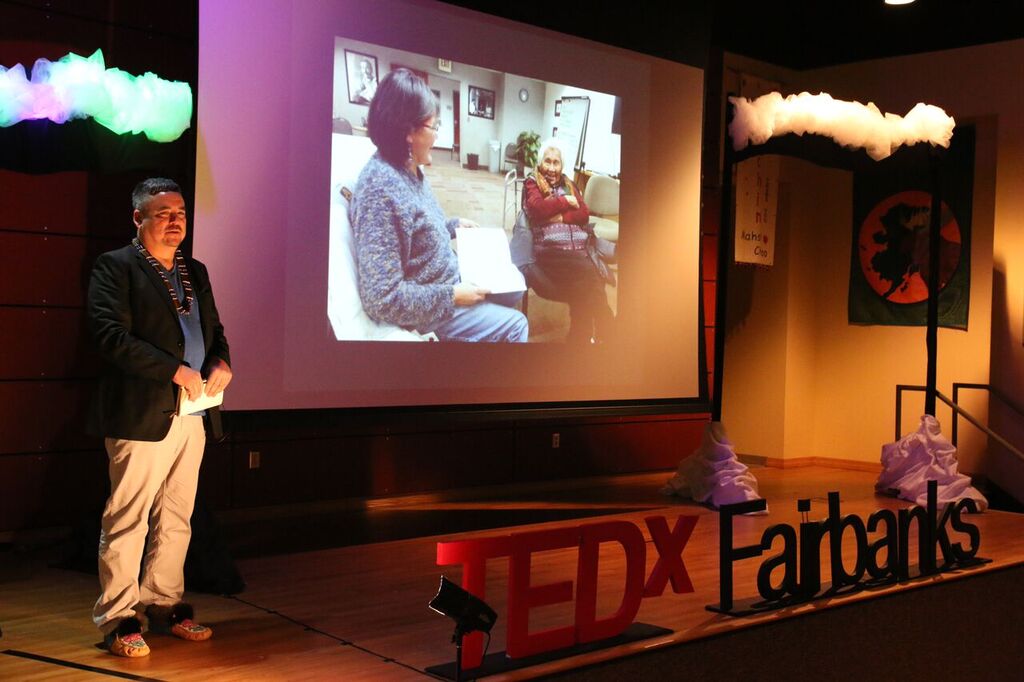 “It is an honor, and a great opportunity (to speak at the event),” Hayton said. “I think we all have important stories to share, and so I feel privileged to share some small part of my journey.”

TED is a nonprofit devoted to spreading ideas, usually in the form of short, powerful talks. TEDx was created in the spirit of TED’s mission, “ideas worth spreading,” and supports independent organizers who want to create a TED-like event in their own community.

In his talk, titled Intimate Space: Athabascan Language, Land, Culture, Hayton discussed how the Athabascan languages of Alaska have developed over centuries in intimate conversation with the natural world.

“Each Athabascan language is a linguistic landscape: the sounds tł’, ts’, shr, a rustle of leaves; ghw, k’, t’, the feel of the earth beneath the feet; aii, oo, uu, branches growing towards the sun,” Hayton explained.

“Athabascan language, stories, beliefs and knowledge passed down for generations are intertwined with the land, representing a living, breathing life force. We must reconnect the broken ties with the land and our languages for healing and revitalization to begin,” he added.

Hayton said he enjoyed the other TEDx speakers, whose topics ranged from sparking innovation and reintegrating the arts, humanities and sciences, to social justice, art, and climate change.

“The genius and beauty of the TED series is that it’s about sharing ideas and inspiration from many different points of view,” Hayton remarked.

Hayton’s passion for language revitalization stems from time spent with elders during his youth in Arctic Village. “‘Diiginjik k’yaa riheeł’ee … We hold our language in high regard.’ I heard this expression many times from elders as I was growing up,” he shared. “They impressed it upon us younger people, and held us responsible for speaking and passing on the language. I still hear their voices in my memory, and I have to honor their wishes as best I can.”