“Strong roots connect us to our well-being” 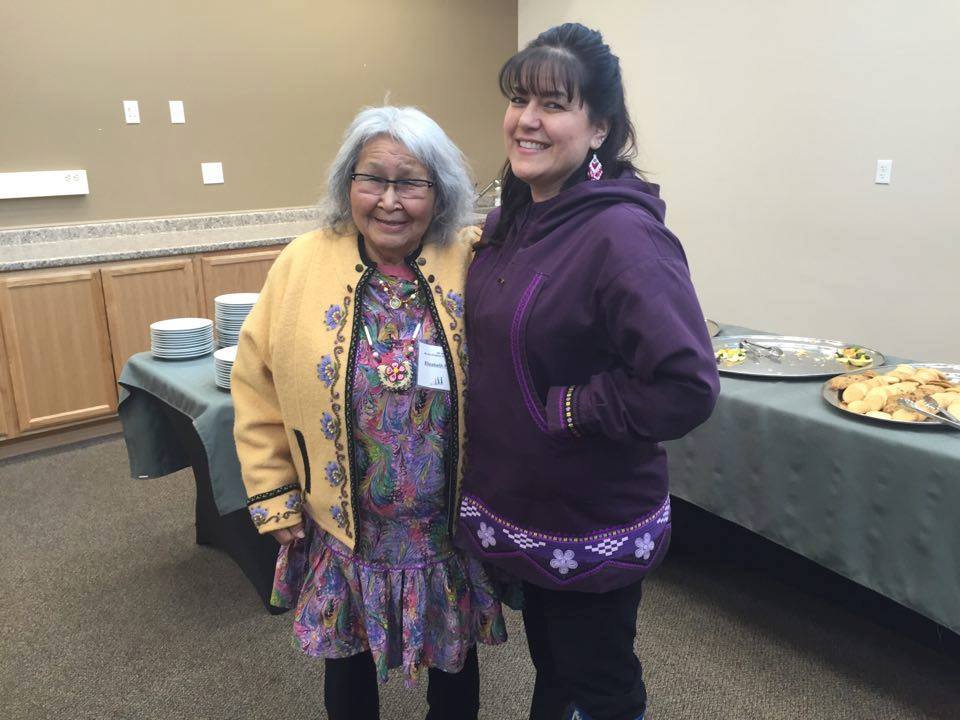 Jennifer is director of the Juneau-based Small Business Development Center, a unit within the Alaska Small Business Development Center, University of Alaska Anchorage. A Doyon Foundation scholarship recipient, Jennifer graduated from the University of Alaska Fairbanks with a bachelor’s degree in 2004 and a master’s of business administration in 2013. Her languages are Denaakk’e, spoken by Koyukon Alaska Native people, and Inupiaq, spoken by Inupiaq Alaska Native people.

Jennifer was a child when her father began introducing her to Inupiaq and Koyukon Athabascan. A non-Native teacher who came to Alaska straight out of college to teach at rural schools, Bob eventually arrived at Allakaket and met Cora, Jennifer’s mother.

Bob immersed himself in Koyukon and Athabascan cultures and in the lifestyles of Allakaket and Alatna. From his father-in-law, Johnson Moses, Bob learned Koyukon Athabascan vocabulary; his mother-in-law, Bertha Nictune Moses, taught him Inupiaq words. Jennifer grew up hearing her father readily incorporate both languages in everyday life.

“He’d say, ‘Wipe your nuvuk,’ (‘boogers,’ in Inupiaq) or ‘You have a big chaga,’ (‘stomach,’ in Koyukon Athabascan),” Jennifer says. And while Episcopal missionaries arriving in the early 1900s taught Jennifer’s parents not to speak their languages – and to not pass them on to their children – Jennifer’s mother went on to learn to speak Koyukon Athabascan as adult after studying at the University of Alaska Fairbanks. Jennifer was enrolled in a fifth-grade bilingual Inupiaq class at Shugnak while her mother completed student teaching at a local school.

Jennifer believes that reconnecting Indigenous people to their culture and languages promotes a healthy society. And though her home in Juneau is far from people who speak her Native languages, Jennifer retains her connection by taking part in programs, including the He ‘ lelo Ola Hilo Field Study Conference in Hilo, Hawaii, in 2017.

“The conference was vital to learning about language immersion programs,” she says. Knowledge gained there led her to write a $1.6 million grant awarded to the Fairbanks Native Association for a Koyukon Athabascan classroom immersion program for preschoolers.

Her plans include continuing to research and write grants and enrolling in language courses in Inupiaq and Koyukon Athabascan. She also serves on Doyon Foundation’s language revitalization committee and was elected to the Foundation board of directors in November 2019.

“I’d like to thank Doyon Foundation and any other organizations that are instrumental in language learning programs,” she says. She knows from her own childhood that one of the best ways to acquire language is to use it in everyday settings.

“Language connects me to my culture,” Jennifer says. “It’s important to learn and preserve language knowledge so we have strong roots that connect us to our well-being.”

As Doyon Foundation continues to grow our language revitalization efforts in the Doyon region, we believe it is important to recognize people who are committed to learning and perpetuating their ancestral language. We are pleased to share some of these “language champion” profiles with you.

If you know a language champion, please nominate him or her by contacting our language program director at foundation@doyon.com. Language champions may also complete our profile questionnaire here. You may learn more about our language revitalization program on our website, or sign up to access the free Doyon Languages Online courses here.